Restoration of the Oratory of Saint Sebastian

Basilica Santissima Annunziata, Florence
January 2018 – July 2021 (approx.)
Under the patronage of Giannozzo and Idanna Pucci
with “Friends of Florence”

The Oratory of St. Sebastian is the ancient heart of the famed Basilica Santissima Annunziata (the Holy Annunciation) in Florence, associated with the Pucci family since 1404. Idanna Pucci with her brother Giannozzo are now restoring this special Oratory to its original splendor with the assistance of Friends of Florence. The project began in March 2018 with master restorer, Daniela Dini, responsible for the cupola, the statues, the frescoes, as well as all the marble work, while master Stefano Scarpelli and his son Marco are restoring the paintings. The Oratory has been serving as a “teaching site” for the students of the American International School in Florence.

The Story of the Oratory

Originally, the Oratory was a simple farmhouse surrounded by woods, two hundred yards outside the northern city walls. After a four-month siege in 1081 and daily barrages of arrows, the walls did not fall and, in memory of that resilience, the farmhouse became a place of prayer devoted to Saint Sebastian because he too had been pierced by arrows and survived.

It is here that the founders of the order “Servants of Maria” – bound by the vow of poverty – first gathered. Eventually, they built a convent and a church attached to the Oratory. Over time, the church grew into a basilica called, Santissima Annunziata, where the Florentine cult of Mary flourished over the centuries. The symbol of Florence became the Madonna, the “feminine divine” that later so inspired Renaissance Art. Brunelleschi’s cupola was seen as the Madonna’s cape metaphorically protecting the city below with her mercy. Florentine brides still come here to leave their bouquets of flowers.

Outside the church, extends a large square once described by the noted historian of architecture Lewis Mumford as “the most beautiful piazza in the world”. Looking at the arched loggia of the Basilica, the Oratory is on the right corner.

The Basilica can be seen behind the statue of  Ferdinando I de’ Medici, Granduke of Tuscany

In 1404, the monks agreed to sell the Oratory to Antonio Pucci, whose son Puccio would later become a banker of great wealth, and closest ally of the Medici family. Puccio’s son, also named Antonio, restored the Oratory, with the noted architect Michelozzo, and in 1475 commissioned the master Piero Pollaiolo to paint a grand altarpiece: The Martyrdom of St. Sebastian.

Over time, the Pucci family suffered tragedies and setbacks. The suffering of St. Sebastian began to carry a profound meaning. In 1601, a new renovation took place. A beautifully decorated cupola rose in gold leaf stucco, mother-of-pearl and sapphire-tinted glass. Circling the cupola’s base, Bernardino Poccetti painted a sequence of magnificent frescoes. The walls were lined with rare inlaid marble imported from quarries in Carrara, Elba, Egypt and the Aegean island of Chios.

The altar was fashioned in translucent alabaster and lapis lazuli from distant Persia. No expense was spared. On either side of the altar hung two large paintings: one by Aurelio Lomi and the other by Giovanbattista Paggi representing crucial moments in the life of St. Sebastian. The Oratory became a “jewel in the crown” of Florence: an intimate, beautifully conceived work of art crystallizing an important spiritual message for the city and future geenrations: “That which can be seen is transitory; the unseen is eternal.”

Suddenly, during the night of November 4th, 1966, the banks of the Arno River burst open and flooded Florence. Over three feet of water and mud gushed into the Oratory that already badly needed repair. Saint Sebastian and the Pucci family were being tested yet again.

Fifty-two years later, the comprehensive plan for restoration received full approval from the City’s Commission of Fine Arts. And now, slowly but surely, the Oratory of Saint Sebastian is at last being reborn.

Although Pollaiolo’s magnificent altarpiece now hangs in the National Gallery of London, the intent is to recreate the Oratory as it was in 1600 when the Pucci family made the last great renovation with luminous frescoes, stunning marble work, and the dreamlike cupola. This will involve placing a state-of-the-art reproduction of the masterpiece above the altar in its original frame. As we live in such a troubled world and witness the increasing destruction of our planet, the symbolic message of this painting – the healing power of resilience and hope – seems now more important than ever. 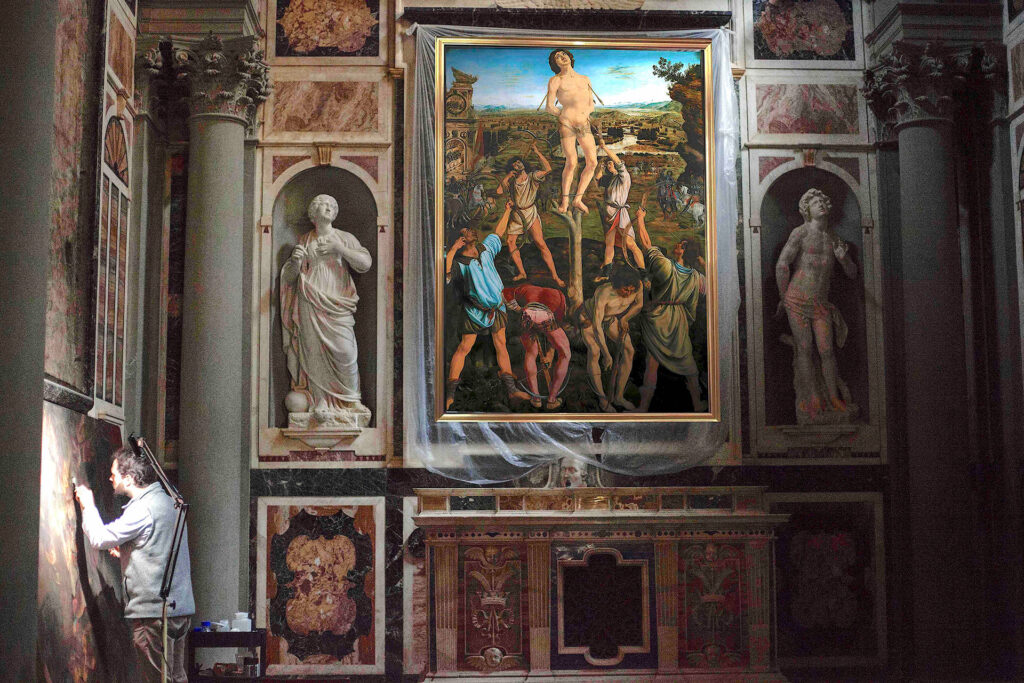 The restoration project is 75% finished. The projected date of completion is July 2021. The balance to be raised is $56,000. Donations are 100% tax deductible. The name of each friend who has contributed will be remembered on an elegant plaque in the Oratory. The best way to donate is to send a check made out and addressed to:

The check must mention the Donor’s name and full address, indicating the “ORATORY OF ST. SEBASTIAN”. Upon receipt of the donation, a letter for the IRS tax deduction purposes will be mailed to the donor. (Please avoid donating through the Friends of Florence website as the credit card company takes a percentage, leaving less for the project.)

The restoration: before and after